Welcome!
Below you can get the complete rider presentation and some of my thoughts, experience and targets but first let me present the form of racing I am involved in.

Endurance Racing: Troubleman Racing #1
Currently competing in the Nordic Endurance Championship. As the name says, it's a real endurance sport, we race for over 6 hours and often with only two riders. Which is why I like it, it’s a test of man, team and machine since it includes pitstops, refuelling, tyre changes and swapping of riders. We are looking to compete in the EWC when we have linked the team together properly.

Real Roadracing: To be announced shortly
Where the target is to conquer the top step of the podium on the Isle of Man races held on the most challenging circuit in the world, Snaefell mountain course. A 37,7 mile track that are held on (closed) public road with no room for error. It's simply the ultimate challenge as you run through towns and get completely airborne in speeds exceeding 180mph. We are also aiming to try to get an entry for this year North West 200 and the Macau GP.

First of all we would like to thank the following Companies and Persons for the support and effort they have contributed with. 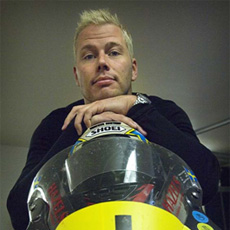 Introduction:
I came in contact with roadracing for the first time in 2003 when a friend of mine, who was competing active for the third year in a row in Superbike, had a sponsorday at Anderstorp racing circuit in Sweden. I went there with my standard R1 2002 and rode as hard as him in front of his own sponsors. He thought it was about time that I get myself a real bike and a licence.

Experiences:
My experiences in my short carrier so far as a roadracingdriver are many. As an “old” motocrossdriver, I do believe that I have some advantages concerning certain parts. For example, the toughness, the physics and the will to train physics are in the back of my bones. But in front of all I believe that as a former motocross rider you get used to certain tankslappers, stearing trouble and skidds as it belongs to the day to day basics in motocross. This makes you not reflect over it in the same way when they occur while you are on the bike. The same goes for the coordination (trottel-brake-clutch-steer) control. I’ve been riding a bike since I was 6 years old so I believe that I have the four limbs under control automatically.
The will to do physical training I brought along to the roadracing, the least fatigure in physics, and the concentration capabilities goes down drastic. That is not acceptable on a 2 hour stint on the edge with a 180 bhp powerful superbike.

Til’ todays date:
Up until now I have only competed when it has fit my calender. My work with my companies has been my biggest focus until today. But now the ground is laid and I have time for other things. Today I have distributors and they are pretty much self going, so the salespart goes on with or without my interference. I can focus on my training and my motorcycleriding because of that. The results and the swiftness wich I have performed on a less competitive material have also arrived in a considerable shorter time than I have expected. I have not got the opportunity that on equal conditions compete against my opponents. The superbike I raced during the last race, when I outraced my opponents, had an exhaustsystem wich dragged to the ground so much that I could’nt lean properly into the left hand turns. The suspension set-up was a compromise beetween me and the other drivers. But all these facts have made me the fighter I am and to pressure me to go even harder. In the end that makes me a better driver once I get the right material and the right helps in the pits.

The Future:
I am looking brightly on my future as a roadracingdriver and promotor for my sponsor’s products. The future will hold a World championship and my target is to compete for the victory in the Endurance WC, as well as all races that I participate in. I will aim specially for the Isle Of Man because it is obvious that it comes naturally for me. I have the opportunity for the next season that together with excellent drivers race the World championship in Endurance and also compete in all Swedish races. In a long term view I’m going to build the strongest team and our goal is of course to win the World championship together with our much needed and much appreciated sponsors.
I have house hold and well thought name on the Isle Of Man and some of my newly found friends in UK, Rick, Clem, Chris and Tom who all have been of great help and support towards my racing goals on the island, have already been in contact with a couple of dealers in UK, on my behalf. I will and I want to be the first Swedish rider to ever win on the Isle of Man. The publicity is incredible! English TV shows the races and the interviews, the video sells in 10.000’s of copies. My sponsors as well as my own companies get a maximum exposure, especially after my performance in the 2006 races with my standard R6-04.

Commitment:
Everything I do, I perform with 100% focus and the strongest will. I set my goals and can suffer through anything to achieve them, in my work as in my roadracing. I know I have the potential and the drive to realize my goals during in a couple of years. During these years I will work determined, structured and I will do whatever it takes to win the most (in my point of view) prestigious race in the world: The Isle of Man TT-Race.